From sustainability efforts, to work within the country that it sits, and an acute attention to detail, the new InterContinental hotel atop the iconic Hanoi Landmark72 building is guiding the way for the ever-growing Cầu Giấy district.

If you watched a time-lapse from the windows of the InterContinental hotel – the highest in Vietnam, you’d see Hanoi in a state of flux, like Shanghai shipping port turning crates into towers, construction is changing Cầu Giấy landscape with precision and ingenuity. The InterContinental Hanoi Landmark72has been situated in the heart of this growing district since 2017, helping to establish what the new Hanoi will be. Not pokey alleyways, but broad roads, ebbing progress, infrastructure, and modernisation.

What is clear about this luxury hotel, however, is its perspective, of both the major strives it’s making as a modern hotel, and the equally major impact it has within Vietnamese society. The hotel easily juggles the ability to be the kind of hotel where racing stars will stay during the 2020 Formula 1, whilst plunging its hands deep into the spring of Hanoian culture, pulling out culinary gems and giving back wealth and experience.

The hotel has won awards for being one of the region’s best luxury business and MICE hotels, whilst also collecting used bars of soap to give to the charity “Soap for Hope”, cleaning and educating children in rural communities. It has inside of it a consistently voted Best Luxury Steakhouse in Vietnam and Southeast Asia, ‘Stellar Steakhouse’, whilst simultaneously giving all of its old linen to “Linen for Life”, providing work for people with disabilities, who will, in turn, turn the discards into usable diapers and clothes to poor communities.

A major driving force behind these initiatives is Robbert Manussen, the General Manager at InterContinental Hanoi Landmark72. Robbert states that everything they do starts with ‘why?’. The underlying philosophy is that every action must have a purpose, and at the InterContinental, that purpose is to create memories.

Robbert explains, “The team is trained, empowered, and encouraged to obtain at least one returning guest a day because of their above-standard and considerate attention to detail. Everything we do has a purpose, to create memorable experiences for all guests, which will make revenue come in as a result.”

This comes with a ‘quality has no price’ mentality, where highly customized experiences are always on offer. For Robbert, as with everything, this always comes back to the standards instilled and sought after in the employees. “We create a culture of passion and pride,” Robbert comments. “It applies to all colleagues. They hold the same ethical standards as the hotel.”

Club InterContinental team on 71st floor - consistently voted as one of the most engaging in Asia, Middle East and Africa

As a part of a major hotel conglomerate – the UK-based InterContinental Hotels Group (IHG), the InterContinental Hanoi Landmark72 is striving to maintain the international standard that IHG are setting across the world. “Similar to IHG as a company, we want to be 2 years ahead of the industry, and grow two times faster than competitors” Robbert comments.

In response to the industry's 4.0 revolution, the InterContinental Hanoi Landmark72 are aiming to implement the powerful ‘Concerto’ cloud-based reservation system, an innovation by IHG and the first ever in the industry, connecting over 5,000 hotels across the world, which includes reservations, revenue management, content management, guest experience data, and social media listening tools. The implementation of this technology will bring this Hanoi hotel to a standard previously unseen throughout the hospitality industry in general.

Back in Hanoi, InterContinental Hanoi Landmark72 has been focusing on the growth in problems indicative of a developing country; it’s environmental and sustainable efforts. The IHG developed its own green-initiative solutions, and the InterContinental were able to secure the Green Engage Level 2 Certification, an international-standard green certificate that holds each of their hotels to an ideally world sustaining level of protection.

It can be a real challenge for a hotel to make sustainable efforts. Consider the issues facing it: so many people coming in and out each day, expecting everything to be clean, new, created for them and them alone, and then multiply those efforts every time you have a MICE event.

With the grounded knowledge of how this turnover impacts the environment, efforts have been put into place to introduce initiatives like the elimination of single-use plastic water bottles in meetings and events, replacing them instead with water fountains, carafes and glass jugs; introducing ‘no-waste coffee break’ themed lunches and dinners; implementing recyclable packaging for all dry amenities in guest rooms; and initiatives with an eye on the future, like their bulk bathroom amenities to be implemented by 2021, removing the use of ‘miniatures’, and their environmental conservation educational programs for guests and employees.

These measures are not, however, just for show. In June 2019, the hotel signed an agreement with Hanoi’s People Committee to reduce, reuse and completely remove single-use plastic by end of 2021.

You’ll find more of these actions behind the scenes, with array of fixtures, like their use of LED lights within the back-of-house, occupancy sensors in the corridors, environmentally-friendly limousine fleets that combine luxury with sustainability, and the segregation of waste, some of which finds its way to local farms and businesses that can properly utilize it.

It is these initiatives that matter so significantly to the Robbert and his staff; one that allow their prosperity to be shared with the place that they live. Mentioned earlier were two initiatives, ‘Soap for Hope’ and ‘Linen for Life’, but their social responsibility stretches far beyond this.

It all kicked off on their first year anniversary with a charity gala that sponsored the operation of 26 cleft lip operations, and has consistently gone on to help the people of Vietnam. One initiative that reflects this concept best is their work with REACH and YCI, to provide training within the hotel for disadvantaged youths. Last year, six out of ten of these apprentices were hired, but the number that they’re training is growing every year.

Sitting atop the Hanoi Landmark72 Tower, built to commemorate the city’s 1,000-year anniversary, it’s easy to feel that this building, the tallest hotel in Vietnam and SouthEast Asia, is a monument to Hanoi’s progress.

Guests staying at the InterContinental Hanoi Landmark72 will have easy access to Vietnam’s majestic attractions, like the sweeping vistas of Ha Long Bay, the serenity of Ninh Binh, or on ground level, with the charm and buzz of development in action, and the slow movement of ministries, government offices and major companies into the area. Needless to say, as Cầu Giấy becomes the modern hub in this growing capital city, the InterContinental Hanoi Landmark72 will be the beacon that guides its way.

Thank you Forbes Vietnam for featuring our hotel.

Forbes Vietnam is part of the world-renowned Forbes economic magazine, delivering accurate and timely information on the latest economic developments in the region and the world. 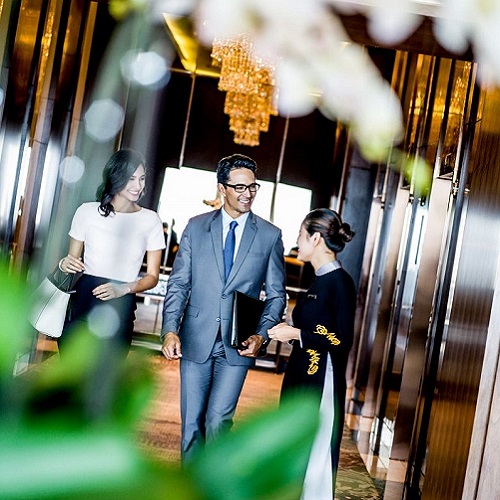 Ask Us About Your Next Meeting

Discover The World Of Weddings

Explore The New Icon Of Style And Luxury